While we’ve gotten to know the area nearest the gate with the FAV, the forest with our cabins, and flats in between — there still remain areas that we’ve not discovered… While Nick was away in Sydney, Jaffa and I went exploring along our Black Mountain boundary. Its nearly rainforest-esque since we’ve had SO much rain lately. This fallen tree has a stump coated in lichen and moss and fell downhill decades ago — its 100 feet in length and would take 2-3 people to encircle it with arms stretched — what a beautiful massive old gum tree! 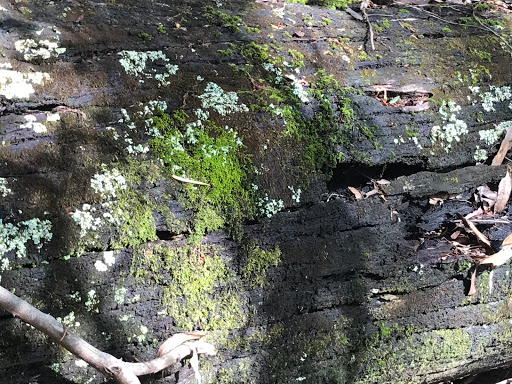 The soft woods like Wattles are great hosts for Stags Leaf and other “pests” which I find lovely. These are a few of several on the same large tree. 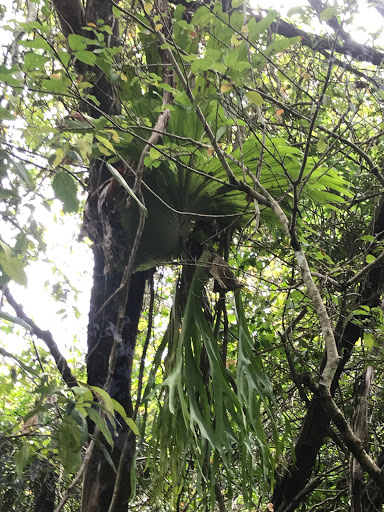 Though Jaffa took off back home — I continued my hike and after several hours trekking up and down embankments, and over much Lantanna — came across a whole new canyon. This is just below our chicken coop and where several of our water falls cascade into after large storms. The photo hardly does it justice… from our corps it falls around 100 metres (300 feet) down to the canyon floor where a storm creek flows, before rising back 130 metres (400 feet) up towards Black Mountain and our boundary on the South East. Its a spectacular place — Nick spent a week occasionally working with whipper snipper and pick axe trying to build a trail down to it. I encouraged him to pause until we have more time and it cools down — but this area remains on our list of projects to uncover so guests may experience it too.